Want a free romantic suspense that will have you on the edge of your seat? FINDING KATE HUNTLEY, by Theresa Ragan, is a romantic suspense that combines romance, murder, and adventure in a fast-paced read. Theresa has graciously offered a free e-book to each person who comments. Please be certain to include your email in your comment, because you will be so glad to get a copy of this book! 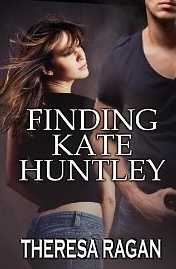 When Kate Huntley was fifteen, she saw her father murdered during a Caribbean vacation off the coast of Haiti. He barely managed to save Kate after he fought off his attacker. Who would harm her father? He was a harmless scientist working to find a cure for AIDS. She lives to avenge him, and remains in Haiti's tough backstreets--where life is hard and lives come cheap. She manages to remain under the murderer(s) radar.

Ten years later, while gaining mental and physical strength with her continued determination, she works for a charter business in Port-au-Prince. But she has not yet found her father’s killer nor avenged her father’s death. Every day she thinks of him and heeds her father’s final words, “Trust no one!” She vows she will never be caught helpless again and has turned into a real kickass heroine. Although she is strong and capable, there’s a sense of inner vulnerability to her too that I found endearing. Without her knowledge, her image is caught on a routine satellite photo that alerts the FBI. They want to talk to her about her father's death and why she's remained missing.

Jack Coffey is a rookie FBI agent sent to find missing Kate and bring her home to the States. At the same time, he is being framed. He realizes he’s been naive and feels foolish, but decides to fight back. Now he trusts no one--something he and Kate have in common. He is a charming man, and a real hunk. Kate discovers him following her after being told a man has asked for her. She confronts him, and their race begins. He doesn’t understand why she won’t trust him; she doesn’t understand why he trusts people who have betrayed him.

The fast-paced plot sweeps the reader along with barely time for a deep breath. I loved the action-filled suspense that kept me guessing to the climax. I also loved the relationship between Kate and Jack as it built from sex and developed into a true romance. FINDING KATE HUNTLEY is a book that will please readers on many levels. I recommend it highly to anyone who reads romance, mystery, suspense, and adventure.

FINDING KATE HUNTLEY is available for $2.99 from Kindle but you can have a FREE copy just by leaving Theresa a comment on this blog and review and including your email. What a deal!

To learn more about Theresa Ragan and her other books, check her website

Thanks to Theresa for her generosity. And thanks for providing me with a copy of FINDING KATE HUNTLEY for this review. I loved it.
Posted by Caroline Clemmons at 1:44 AM

This book is sounding like a great read. I'm looking forward to reading it. Thanks for the review :)

Wish I had a Kindle...mayby some day soon. This sounds like a great read!

Phew, she's all over the place today!

Theresa, thank you so much for your generous gift of books to those who comment. What a lovely gesture.

I already own this book and I agree it was a great one. I found Kate Huntley
lvs2dv at gmail dot com

I can't wait to read this book, because I found Kate Huntley!

I love this sentence: The fast-paced plot sweeps the reader along with barely time for a deep breath. Oh, yah - you totally sold me with just this one statement. Great review :)

Looking forward to reading this!

Hi Theresa,
Finding Kate Huntley sounds wonderful. I don't own a kindle, but I wish you every success!

Wow, it sounds really good and thanks for offering us a free ebook!
Lynn/MI lynn@tangledyarn.com

After reading your short description of your book, I cannot wait to dig my teeth into it (not literally of course! ha) Thank you for my free copy of your book and good luck on the rest of the tour!

I am anxious to read FINDING KATE HUNTLEY. Your description made me want to start immediately. Thank you for offering it for free. My father used to fly in & out of Haitii when we were stationed in Puerto Rico so that adds to my interest.
Linda Wood
lindawood@sbcglobal.net

Theresa, your book sounds really great and I would be thrilled to have a copy!

This sounds like my kind of book... can't wait to read it on my Kindle.


Looking forward to reading this, thanks for the great review.

Thanks for the review!

Any book that combines romance, mystery, suspense, and adventure is a winner in my mind! Looking forward to reading Finding Kate Huntley - thank you for your generous offer!

"I found Kate Huntley" cant wait to read it. rlrlaney@yahoo.com

This sounds exciting! Count me in.

No, no, no---I FOUND KATE HUNTLY! There sure must be a lot of Kate Huntleys around. :)

Hehehehe...great review, Caroline. I've already read it and was kept on the edge of my seat!

"I found Kate Huntley"!! I'm looking forward to reading this!

I just stopped by to say that "I found Kate Huntley"!

Thanks for the great review, I can't wait to read the book.

I found Kate Huntley!!! And I would love to win the survival kit!
Thanks so much! :)
kandihutt0n@aol.com

Thank you for participating in this fun Menage A Blog. I love the sound of this book and cannot wait to read it.

I am so glad I Found Kate Huntley :)

There are a lot of Kate Huntley'who've been found. I hope I've found the right one:) Thank you for the thorough review. It sounds like an interesting book.
rubypjohnson[at]gmail[dot]com

From sexy schmexy to romance. Must read it!!
"I found Kate Huntley"
sk_86(at)gmx(dot)de

I found Kate Huntley. Sounds like a great book :-)

As I Lay Bleeding said...

"I found Kate Huntley" Well written review that has me really wanting to read this story.

You gotta read all the reviews! It's a must read!

I Found Kate Huntley! I can't wait to read this one. If its anything like the others Theresa has written it has to be good!

I found Kate Huntley! This book sounds great after all the great reviews I have read. Thank you for participating in this event.

thanks for commenting everyone. And thanks for the great review, Caroline.

Brenda C, this is a free download for your computer. You go to smashwords and pick any format you prefer. You might want to leave your email address and give it a try!

'I found Kate Huntley.' Well she does seem rather easy to find. From reports the twists are ones you will not see coming. I hope so because that is the kind of story I love

I hope its not too late.
Sounds like a great read!
I found Kate Huntley.

I just got a kindle and am loving every minute of it. Would love to read your great sounding book. Thanks sagil@comcast.net

I would love to read this book. I love kickass heroines.

Glad you enjoyed reading it! All the reviews I have read were great.

The book sounds really great. I would love a copy
rolyn57@verizon.net

Theresa, you've surely created a lot of fans through your generosity and excellent writing. Please let me know if you'd like to be my guest again.

Hi I found Kate Huntly and good luck and my name is Joannie and email is jscddmj@aol.com thanks

I can't wait to read this book. From you review and the others this a a A#1 read. Thank you, so the next time I can say, "I found Kate Huntley".