By Caroline Clemmons
I have a surprise for you—O’NEILL’S TEXAS BRIDE, book 2 of The McClintock Series, is on sale for 99¢ today through Thursday, August 12. Here’s the link: https://www.amazon.com/ONeills-Texas-Bride-McClintocks-Book-ebook/dp/B00XM684LQ/  Of course, this book is also in KU and is available in print as well as e-book. 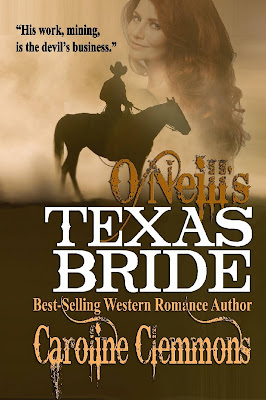 Finn O’Neill is the older brother of Cenora, the heroine of McCLINTOCK’S IRISH BRIDE. Finn is a hard working, admirable young man who’s dream is to own a ranch where he can raise horses. When the opportunity to earn a fee that would get his dream property is given him, he takes the chance. To get the bounty, he has to go undercover as a coal miner and discover who is behind sabotage at a mine. He puts his life in jeopardy in hope of gaining his goal.

Finn O’Neill longs for his own ranch, his own horses, his own home and family, but thought the lofty dream beyond him. Now the opportunity has arisen, but to achieve his dream, he bargains with Grandpa McClintock and his nephew to pose as a miner and seek out the person or persons causing disasters at the Farland Coal Mine.
Stella Clayton has witnessed the heartbreak and tragedy of a coal miner’s life. Her family came from England to the promise of a better life only to find the same hardships. She is determined that her young brother will never follow in their father’s footsteps. And she vows she will never marry a man engaged in that work. She fights to resist charms of the handsome Irishman who’s recently come to work in Lignite, Texas.
When Finn arrives in Lignite, he immediately falls for the beautiful schoolteacher, Stella Clayton. But her father is one of the men suspected of causing destruction. What Finn discovers soon puts him and members of the Clayton family in peril. Can he salvage his dream, fulfill his promise, and protect the woman he loves and her family?

Aleski clapped Finn on the back. “You still unwilling to play cards with me?”
“Right you are. Minin’ is the only stupid thing I do.”
Aleski laughed, as did the other three.
Jose Garza said, “You’re a smart man, O’Neill. The Pole, he will take your money if you let him.”
Aleski said, “Aw, it’s only the scrip. Worthless anyway.”
Ulys Young nudged Aleski. “Not as much as you have. Most of us have lost a part of our pay to you at one time or another.”
Aleski frowned. “You saying I cheat?”
Ulys held out a hand to signal protest. “As good a player as you has no need.”
The Pole’s frown disappeared. “This is what I always say. Everyone is good at something. I’m good at cards. They speak to me.”
“Talking cards? What do they say?” Finn asked with a smile.
“You know that is not what I meant, but they do say ‘there is the ace’ or ‘that man has the king.’ Then I know how to manage my cards.”
“Sure and I’ve known others with that ability, but I don’t have it meself.” Finn wasn’t convinced Aleski didn’t cheat. He won too often for the odds. Still, he might really be smart enough to keep track of the cards played and figure out who had what left in his hand. Was he also clever enough to stage “accidents” without detection?
Council, Ivan, and Ulys split off and walked toward the houses while Jose, Aleski, and Finn headed for the longhouse.
“I play the Solitaire,” Jose said. “Then even when I lose, I keep my pay.”
“Smart.” Finn said. “By now I’m so tired my brain is mush. Think I’ll take a walk after supper and then turn in.”
They reached the metal tubs and pump for washing up before they went inside to dine.
“Sí, tonight I am especially tired. I tried to keep up with you and Señor Clayton. You two will kill me, but we are sure to win the bonus this month.”
“More scrip to waste at the store.” Finn filled his plate with watery stew and took a chunk of thick bread.
Jose stayed beside him. “No, didn’t you know the bonus is real money? If we win, I will give a part of my salary to the boy who fell and broke his leg. He will be far behind by the time he can work again.”
Finn couldn’t hide his surprise. “Surely Farland will pay for all his care since he works and lives here.”
Aleski laughed as they found seats at the long table. “Are you crazy? Farland will charge him for his stay at the hospital, the doctor’s fees, nursing fee, and every meal he eats. He’ll never get it all repaid.”
Anger shot through Finn. “That’s downright underhanded and makes me plenty mad. I’ll donate some o’ my pay also. And we will win the bonus.”
The Pole nodded and forked up a bite of potato. “I believe so. I’ll keep any cash, but I’ll donate my other winnings. After all, some belonged to the boy before he fell.”
“That’s good o’ you both. Mayhap I’ll take up a collection among the single men. Those who are married need every piece o’ worthless pay they can get.” 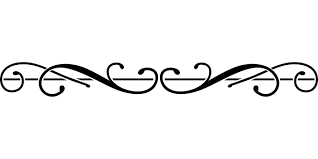 If you’re familiar with company scrip, you’ll understand this song by Tennessee Ernie Ford, “Sixteen Tons”, from a 1956 appearance on the Dinah Shore Show.
Posted by Caroline Clemmons at 1:30 AM