In the first book of the Pearson Grove Series, MAIL ORDR MORIAH, Alexandra Novak was not heroic. In fact, she was a spiteful brat.  Since then, life has shaken her world and forced her to realize how selfish she’d been. Don’t you love it when the bad girl turns good? I hope you do, because she is the heroine in ALEXANDRA’S AWAKENING, book 2 of the Pearson Grove Series. The book is on sale for 99¢ from today through Monday midnight, August 30. 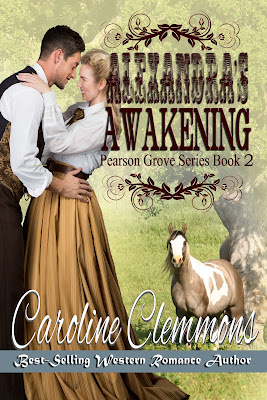 A wealthy woman forced to change...

A heroic sheriff standing his ground...

The danger that unites them…

Alexandra Novak has been raised in wealth and is used to having whatever she wishes. Her parents have spoiled her and she’d begun to believe it her right. A fire that destroys her family home and almost costs her mother’s life starts Alexandra to rethink her values. When her father’s revelation shatters her world, she is determined to do whatever necessary to make her father happy—even if it means being nice to that girl he’s brought into their home.

Virgil Witt is the best sheriff Pearson Grove has had. Under his leadership, crime is at an all-time low. He has reconciled himself to the fact that he is destined to live alone except for his dog. Maybe that’s best since his job is a dangerous one. He can’t understand why Alexandra chases him, especially not after he’s explained he has no money.

When danger strikes the Novak family, can Virgil solve the problem in time? How can Alexandra convince Virgil she has changed? Can the two of them work together or will her need for the best resurface?

Here’s the buy link at Amazon:

Alexandra crept until she was several houses away then hurried to the footbridge over Pearson Creek. She leaned on the railing and let out all her frustration, disappointment, and resentment. With her arms crossed on the rail and her head pillowed on them, she didn’t know how long she sobbed.

“Here, now. Nothing’s as bad as that. You mustn’t jump.” Strong arms gently pulled her away from the rail.

As if being caught here wasn’t bad enough, she recognized that voice. “I wasn’t going to jump, Sheriff Witt. Can’t a person have any privacy?”

“Miss Novak? This is not an area of town for a woman like you to be out alone in the evening. What are you doing here?”

“That’s none of your business. Besides, I thought you prided yourself that the town was safe.” How could she explain such a humiliating incident?

He turned her to face him but she wouldn’t meet his gaze.

“Alex… Miss Novak, I can’t force you to explain, but as sheriff of Pearson Grove, your safety is very much my business. In general, Pearson Grove is a safe town. All it takes is one bad person to assault you. You understand why I can’t leave you here alone. I’ll walk you home.”

“I can’t go home with my face all red and blotchy. What if someone sees me on the way?” She broke out in a new wave of sobbing and rested her head on the sheriff’s chest.

His arms came around her, patting and caressing her back. “Nothing is as bad as all that. What or who has you so upset?”

“Papa… Papa and Ron are at that girl… that Lula’s house. Why are they there? What is the attraction that she offers that Mama and I don’t? Why did they lie and say they were going to the Lodge? Oh, it’s too horrible to contemplate.” She couldn’t stop the new round of sobbing against his broad chest.

His embrace tightened and she thought he kissed her hair near her temple. Before she could process that intimacy, he continued, “Instead of worrying, why don’t you ask your father?”

“Ask him? Admit that I’ve been following him? How can I do that? He’d be hurt and angry. What would Mama think if she knew? Poor Mama.”

“Would asking him for an explanation be so bad? Could hearing any reasons possibly be worse than the way you feel now?”

She heaved a heavy sigh. “I guess not, but I don’t know if I can bring myself to confront them.”

Still holding her close, Virgil chuckled, his mouth near her ear. “I believe you can do whatever you set your mind to do. Come on,” he pulled away and handed her a handkerchief, “Dry your eyes so I can walk you home.”

Alexandra dabbed at her eyes and blew her nose. When she cried her face got all blotchy red and she imagined that’s how she looked now. She pulled the shawl further forward over her face, hoping it shielded her features from prying eyes in case they met anyone on the way home. With a deep breath, she stiffened her spine and held her head erect.

“I’m ready, Sheriff.” She took his arm as if he were leading her in most formal circumstances.

“Miss Novak, please don’t come down this way again alone at night. I come this way every evening. I’d be happy to escort you wherever you wish to go.”

“I’ve seen more than enough of this part of town and have no wish to ever come here again. But, I thank you for your offer.”

They strolled toward her house with the sheriff stopping once in a while to make sure a door was locked.

“That’s another part of my job. I ensure that no one forgot to lock his door and that no one broke in. Since I’ve been sheriff, the crime rate in town has gone down. I intend to keep it that way.”

“Do the businessmen know you do this?”

“They certainly do and they’re all in favor. It’s especially important if someone’s in a hurry and forgets to lock up. I don’t want any invitations issued for burglars to help themselves.”

“I only know about the bank and I know Papa and Ron always make sure everything is locked. I bet you’ve never found their door unlocked.”

“Nope, not even once. You’d be surprised at some I have found open.”

“To quote you, Miss Novak, that’s none of your business.”

The nerve of him, talking to her like that. “Virgil Witt, you are the orneriest man.”

“Ha, like when you shoveled the snow from old Mr. Althoff’s walk last winter, that kind of fear? Oh, and when you repaired Mrs. Whittenberg’s front porch, that must have terrorized her.” If there were brighter light from the lamp post she’d be sure, but she thought he blushed.

His free hand tugged at his collar. “Well, I do community service you know. That’s part of my job too.”

“Phfft, I don’t think it is. I remember reading the requirements for the sheriff. You’re only to keep the peace and not break laws and to be fair so that everyone gets the same treatment. I suppose you do that even though you’re a lot friendlier to some than others.”

“I have friends I like to associate with when I can.”

“Yes, Scott’s been a friend since he moved here and now Moriah is a friend as well. I also know people I never want to be around unless I absolutely have to.”

His steps faltered. “M-Miss Novak, why would you say such a thing?”

“Don’t think I haven’t noticed that every time you see me, you turn and go the other way. I guess partly you’re mad at me for breaking the engagement with Scott.”

“Not at all. You two should never have been engaged in the first place.”

“Why would you say that?” Before he could answer, she held up her hand. “No, wait, now that I think about it, you ran when you saw me before Scott and I stepped out together, much less were engaged. What did I ever do to make you dislike me so strongly?”

He spluttered a bit before he said, “I-I don’t dislike you, Miss Novak, so please don’t think I do. Here we are at your home’s front door. I’ll bid you goodnight.” He tipped his hat and turned to leave.

She fisted her hands on her hips. “There you go, running away again as if I were some sort of monster who frightened you.”

He turned back and faced her, a scowl on his face. “I do not run away in fear when I see anyone, Miss Novak, is that clear?”

She took a step his way. “What would you call the way you turn tail every time you see me?”

He sent her a wry grin. “Merely self preservation, ma’am.” He bowed and tipped his hat. “Goodnight.” 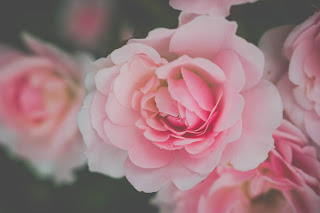 Don't forget that THEODOSIA: A Proxy Mail-Order Bride, is available now for only $2.99 or free in Kindle Unlimited. The print version is awaiting Amazon's approval. THEODOSIA is a sweet western historical romance set in 1878.