Fake Me by Bonnie Edwards 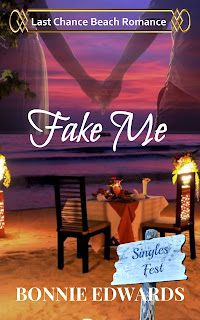 Fake Me for All Retailers

International real estate broker Grady O’Hara, unkempt, miserable, and nursing his battered heart, is holed up in the Landseer Motel in Last Chance Beach. A first-class grump, Grady’s appalled that enthusiastic sprite, Farren Parks wants him to open his motel to single parents looking for love. He suspects his sister has sent Farren to lure him into a romance. Again. The last one ended in disaster.

Farren expects him to tolerate children laughing. No! Crowds of happy families? No!

He does not want a second chance at life. Or love.

Grady soon plays handyman, painter, and business advisor to Farren’s fledgling business, Singles Fest. The happy squeals of children in the pool doesn’t grate on his nerves as he expected. He sees parents making romantic connections that stir his heart.

But an old flame of Farren’s has arrived and Grady wakes up to another looming loss if Farren gives her first love a second chance. The rival has brought his adorable kids to the motel. A rival who’s clearly looking for a new wife…

“So long for now. Farren, call me later, okay?”

“Okay,” she promised with a roll of her eyes. She went pink in the cheeks as if there were a hidden female message in the simple request.

As Eva picked her way through the tables away from them, Grady pounced. “Why the eye-roll?”

“She assumes we’re here on a date.” She lifted one smooth shoulder and dropped it.

She brightened. “That’s right. It’s exactly what we want. Except Eva doesn’t gossip.”

“When you talk to her later, confirm that we’re seeing each other.” He reconsidered. “Or, that lunch was more than work. That might be the better way to go.”

“So, you’re giving me lessons in fake dating now?”

The server set their frosted glasses of beer on the table and raised her eyebrows at his comment. He glared at her. “I said ‘fake me,’ not the word you think you heard.”

The server grinned. “Whatever. It’s pretty clear what you meant.” She pivoted and tossed Farren a saucy smile before stepping away.

“Now, that, will get us noticed,” Farren said as her shoulders rolled through her full-throated bout of laughter. “Good job, Grady.” She leaned low across the table toward him deepening the shadow between her breasts. “For sure Delphine will hear about this. ‘Fake me, baby.’ Too funny.”

He frowned. It was the wrong impression for his sister. He wanted to show her that he’d woken from his recent stasis, not that he was ready to ravish unsuspecting innocents, like Farren.

He took a sip of beer to wet his dry throat and tried not to think about that other F word.

Question: Is the setting for Fake Me real or fictitious?

Last Chance Beach is only real in the mind of our readers. I say “our” because several authors have got together to create wonderful romances set on this island. Our stories are eclectic, and there’s something for everyone’s preference. Fake Me is fun and light and starts a trilogy I have planned for Last Chance Beach firmly rooted in Farren’s “Singles Fest.” If you read these Last Chance Beach romances, you’ll see cameos from other characters, familiar locations and all the charm of a small beach town. 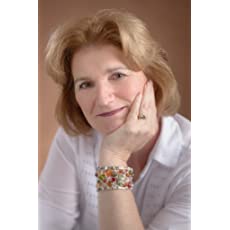 She may jump around within romance, but all her stories come with a tear, a laugh, and a happy ending. Published by Kensington Books, Harlequin Books, Carina Press, and Robinson (UK) Bonnie’s stories stretch from short stories to novellas and novels. Now, she's happy to be publishing her work herself.

With over 35 titles to her credit, she has been translated into several languages and sold books worldwide. Aside from standalone romances, she has 4 ongoing romance series, Tales of Perdition, The Brantons, and Love at Christmas. Contemporary family sagas find a home in Return to Welcome. She's hard at work on a new series releasing in August 2021. Learn about more exciting releases and get a free romance by subscribing to her newsletter, Bonnie’s Newsy Bits