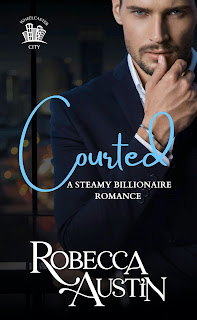 The sentiment has been drilled into Latricia’s mind since birth.

When she’s forced to choose between self-respect or her family, what would she sacrifice?

The first time she saw Heath McCreath, he was out for blood. Her brother’s blood.

At their second meeting, he vowed to make her pay for her brother’s crimes.

As if his promise to destroy everything she loved isn’t bad enough, the threats come from the sexiest mouth she’s ever seen.

He’s her blackmailer and she shouldn’t feel anything for him, so why does her body betray her?

Now she has to decide, him or her?

Latricia sniffed the collar of the shirt she’d worn to bed these past nights, surprised that traces of Heath’s scent still lingered, and now mingled with hers. She should have accepted his offer to have Terrance take her shopping the day she’d been pampered, but she never envisioned sharing his bed. True, that first night, seeing him shirtless had made sleep restless, but tonight was different. Unwittingly, her affection for him was deepening. Marriage made their relationship more complicated.

Taking a steadying breath, she opened the bathroom door and stepped out, almost stumbling at the sight of him already in bed, the covers drawn around his torso. His fingers stilled over whatever message he’d been sending on his phone as he drank her in.

Flipping off the bathroom light, she pulled back the sheets before slipping into bed, settling the covers over her stomach. Never was she self-conscious about sleeping, but tonight, every part of her was attuned to every inch of him. How could she relax, much less sleep, with him encroaching on her space, rallying for her attention?

“Did you enjoy dinner?” He rolled onto his side, propping his head onto his elbow.

Grateful he’d broken the silence, she said, “Yes, the Pruesos are nice.”

“I wouldn’t know.” His gaze roamed over her face. “I spent the entire evening watching you eat.”

Her skin warmed at his admission.

The thumb from his free hand rolled down the center of her parted lips, from top to bottom. “Wishing I was the cause of your delight. Not the morsel of food you’d slipped onto your tongue.”

What would he taste like when she swirled her tongue around his cock? Smooth… delicious? If his kiss was anything to go by, she suspected his flavor was an enticing concoction.

Robecca Austin is the author of happy ever after romance stories. She enjoys crafting tales of sassy heroines and alpha heroes that have a soft center.

You can find her outside enjoying nature and lots of sunshine when there are no bugs. When she's not writing her next novel, she's busy battling Cystic Fibrosis and hugging family. She lives and works in Canada.

Thank you so much for having me, Caroline!

Thank you Caroline fans. I hope you have as much fun reading Heath and Latricia’s story as much as I enjoyed writing it.

I love chatting, so don’t be shy.