Window Over The Desk by Liz Flaherty 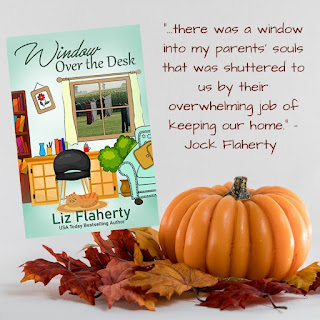 Window Over The Desk

“I read a post on Facebook this morning where the writer said he hated social media. Although he was making a good point, I’m sure the irony didn’t escape him that he was using a social media platform to decry its value.” – Liz Flaherty, Window Over the Desk

I am here not only to promote my book but to make a full confession. Picture if you will a woman of a certain age standing slump-shouldered with her head bowed so that you can see where her roots are growing out. Confessing.

It is where I keep up with numerous and sundry nieces, nephews, fellow writers, singers from the 60s, and even the occasional reader. It has taught me the value of scrolling, of looking things up even when I’m almost sure they’re true, and of—not for the first time—loving your neighbor.

The essays in Window Over the Desk are kind of like Facebook, but you don’t have to scroll and I don’t care who you voted for.

Giveaway! Because it’s the holiday season and my favorite time of year. I’ll send a Christmas ornament and a backlist paperback to a commenter who shares the name of their favorite holiday song—and why.

Unrequited Love, And Yet…

So, have you ever been in unrequited love, where the person who holds your heart doesn’t feel anything about you? Or feels friendship and really only wants to talk to you about the one he really loves? Or, oh, Lord, doesn’t even know you’re alive. (That’s how it is for Sam Elliott and me, but...oh, well.)

I have been, of course. I made a high school career of being unpopular—which contrary to my belief at the time, didn’t kill me. My first boyfriend was rebounding from a breakup. I thought he the coolest thing since sliced bread—he thought I was...handy.

I didn’t marry the first person I loved, although I married the last and best. Every day for 50 years we’ve told each other we loved each other more than once. Usually, one of us says, “I love you more,” and the other person says, “No, you don’t.”

Yesterday, we talked about that. The truth is, there are times when I really do love him more. There are other times when he loves me more. This is, I guess, what runs the marriage-go-round for us. We’ve had some hard times in our life together. There have been a few years I wouldn’t want to go through again. Him, too, and they would be different years.

Unrequited love isn’t something I’ve written about, although I’m a fan of marriage resurrected—which is sometimes the same thing. I remember reading some stories when I was younger that used this trope and used it well. I believe the stories were historical, which made them more believable (for me.) I admit to having trouble placing a modern young woman in a situation where she was the one giving all the love. But I remember...

I read a short story once, and I apologize for not being able to give either the title or the author. It was about a couple in their 30s who just kind of ended up together because there they were in their 30s and ready to have a family and it had never happened. So they dated and eventually married—all with no depth of feeling. They were leaving for their honeymoon, and I don’t remember what the conversation was, but they had a flat tire and he was going for help on what I think was a dark and muddy night. He told her to wait in the car and stay safe. She watched him walk away, and suddenly got out of the car and ran to catch up with him, placing her hand in his so that they would go on together. The final words of the story were, paraphrased, “And so it was, that on the day she was married, she fell in love with her husband.”

I have no idea how long ago I read the story, but it still thrills me. In romantic fiction, unrequited love is the same thing as hope, and I guess that’s my favorite trope of all. 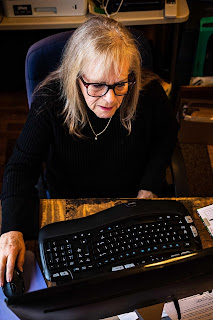 Retired from the post office, Liz Flaherty spends non-writing time sewing, quilting, and wanting to travel. The author of 20-some books and her husband Duane share an old farmhouse in North Central Indiana that they talk about leaving. However, that would require clearing baseball trophies from the attic and dusting the pictures of the Magnificent Seven, their grandchildren, so they’ll probably stay where they are. Liz can be reached at lizkflaherty@gmail.com or found at http://lizflaherty.net

This sounds like a terrific book. I look forward to reading it. Love your anecdotes.

Thanks for having me, Caroline!

I am starting 'Window Over the Desk' today! Can't wait to get started - I think these two books might be my favorites of yours I've read so far!!! Love you Liz & thanks for all you've done for me as a writer. BTW you don't have to send me anything for posting - just wanted to!

I love Mariah Carey's 'All I Want for Christmas Is You'. It just always makes me smile. She sure can sing!