Hope In Her Heart by Julia Ridgmont 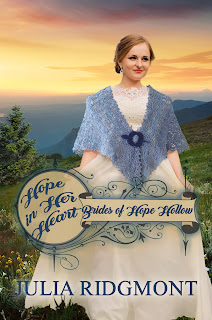 Hope In Her Heart

Blurb for Hope in Her Heart

She's trying to get a lost family heirloom back. He's trying to catch two notorious thieves. In order to accomplish both, they'll have to put everything, including their hearts, on the line.  June 1882  Emma Hutchins is tired of being stuck at home, helping her mother tend to her eight younger siblings. She wants adventure and romance. But mostly, she wants a new life outside of Hope Hollow, Oregon. When she is held up during a bank robbery, she needs help getting out of the terrifying situation alive. When that help comes in the form of U.S. Marshal Patrick Carter, she doesn’t know whether to slug him—or kiss him.  Patrick Carter left southern Oregon years ago after an argument with his father. Now both of his parents are gone, and he wants to rebuild his relationship with his sister, who is married and living in Hope Hollow. The problem? Lovely Miss Emma Hutchins, who thinks she’s smart and brave enough to chase after a couple of dangerous bandits. Fearing she’ll get herself killed in the process—and maybe him, too—Patrick reluctantly partners up with her even though it goes against everything he’s been taught. And the townspeople are talking…  But when Patrick and Emma discover an even bigger plot to swindle money from innocent folks, they are faced with more danger than they first realized. Will their growing attraction get in the way of catching the thieves, or will they finally be able to admit their feelings for each other?

“If I remember correctly, I sent you home. You would defy the orders of a U.S. Marshal?”

The embarrassing heat from before infused Emma’s cheeks once again. “Yes, I suppose I did,” she said, steadily looking Marshal Carter in the eye.

He ground his teeth. “Ah, yes. You introduced yourself to my horse a moment ago, lovely Emma. And do you have a last name?”

Lovely? A feeling of joy bloomed in Emma’s heart like the petals of a delicate flower in springtime. “Hutchins.”

“Great. Now I know who to arrest for interfering with an investigation.”

Eyes narrowing and nostrils flaring, he replied, “That’s where you’re wrong. I’d do it in a heartbeat if it sent an ill prepared girl like yourself home where you belonged. I don’t need to be rescuing you again while trying to capture those two lunatics up ahead. And the mare you’re riding looks like it belongs out in the pasture. If you ride her too hard, she’ll likely keel over in the middle of nowhere, and then what would you do?”

The marshal’s icy tone stunned Emma, but only for a moment. Gathering her courage, she stood as tall as she could, which wasn’t much considering she was only five feet and three inches, and said, “I assure you, Marshal, I don’t make a habit of disobeying orders from a lawman. I don’t even have much to do with lawmen ordinarily. But the necklace I lost is a family heirloom.”

For a minute, while standing in line waiting to speak to the clerk, she had debated whether or not to offer it as collateral so as to help feed her family this month. But no, it was too valuable for that. Her Great-grandmother Luikenhuis had brought it across the ocean from her mother land of Holland. And even though Emma’s great-grandmother had long since passed on, Grandma Hutchins, her daughter and Emma’s father’s mother, still spoke in Dutch or used traditional phrases at times. It was worth a fortune, and Mama and Papa would be very upset if she didn’t get it back.

Grimacing, she continued, “I shouldn’t have been wearing it, and if my parents learn that it’s gone, they will likely skin me alive.”

A sardonic chuckle followed. “I very much doubt that. I’m sure once your parents learn that you were caught in the bank when those robbers came in, they’ll only be happy and grateful to know you are safe.” He frowned. “Which you will not be if you continue this folly, Miss Hutchins. Not only that, but you’re likely to get me killed, too. I have no desire to meet my Maker today. Do I make myself clear?” He enunciated each word in his next directive. “Go back home.”

“I can’t,” she spat, folding her arms over her bosom and frowning at him. “You sullied my reputation by implying that I am with child.”

Marshal Carter had also mentioned that she was his wife, but since he seemed to be so repulsed by her, Emma didn’t want to rile him any further than necessary.

Emma felt a moment of satisfaction when his hands came up in a defensive position. “Hold on there. I did what I had to do to get your neck out of the noose you put it in with your foolishness. You’re lucky to be alive right now. If you didn’t want your reputation ruined, then you should have kept your mouth shut when those bandits told you to give them your necklace.”

“A family heirloom, I know,” he finished for her, nodding. “But you had to give it to them, anyway. See what your impulsiveness cost you?”

Emma remained silent, but inside she was fuming. What an odious man! “Well,” she said in a voice of steel, “you obviously think I’m old enough to be carrying a man’s child, yet you’ve called me a school girl, too. You can’t have it both ways.”

Marshal Carter’s eyes raked over her body and Emma felt a flush come over her. Not again! What was it about this man that made her want to fall into his strong arms yet claw at his face at the same time? She’d had enough of his smirk and superior attitude for one day.

He surprised her by asking, “How old are you, anyway?”

“Perhaps I should offer to marry you just to make an honest woman out of you. How about it, Miss Hutchins? Would you do me the honor of becoming my wife in name only so as to save your reputation?” 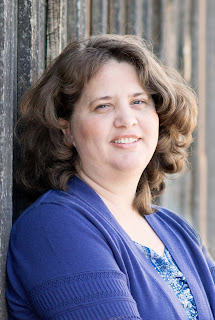 Julia Ridgmont grew up in the American West, but that doesn’t necessarily mean she knows how to ride a horse. What it does mean, however, is that she loves to weave the country’s rich history into riveting tales full of romance and intrigue.

When she’s not writing, Julia enjoys cooking, sewing costumes for her children, spending time with her husband, and watching her children perform in sports or plays—or, if she’s really bored or stuck on a plot twist, cleaning the house. She also writes contemporary inspirational romance under her real name, Laura L. Walker.

Follow Julia as she unveils heroes whose strength and courage are only surpassed by their tenderness, and heroines who hide their lonely hearts with a cover of steel. It will take overcoming insurmountable odds and an iron will for them to find a love that lasts forever. Luckily, they have Julia to help them along.