Celebrate Father’s Day weekend with a 99 cent sale! That’s right—each book in our popular Bachelors and Babies Series is on sale for 99 cents June 17 - 19.

What happens when a bachelor suddenly becomes responsible for the care of a baby? Plenty!

Each book is a stand-alone and each is unique. 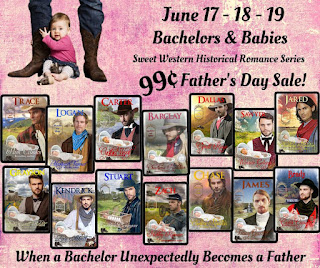 My book in the sale is STUART. Below a few of the reviews from Amazon. The first one is my favorite 😍:

Kind of a cross between Janette Oke and Louis L'amour

Another wonderful story by the very talented author Caroline Clemmons. I loved reading Georgina and Stuart's story so much! I highly recommend this ebook!

I was so delighted with this author’s story.

Sweet characters, a little danger and strong family ties! Another great read from this author! Can't wait to read the rest of the series!

This is such a delightful and sweet story. 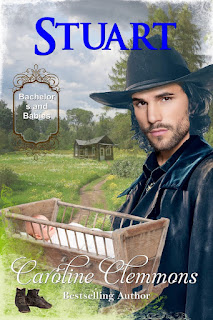 Here’s a summary of STUART:

Trouble could destroy their family

Georgina Potter has to get away from home. Her family treats her as a screw-up. She is determined to prove them wrong. Starting over as a mail-order bride might not be the best way but it’s the only way she can get away from her family. When she arrives in Broken Wheel, Texas, she learns her groom has married someone else. What is she going to do with no money, no groom, and nowhere to stay?

When Georgina and Stuart marry, neither is convinced it’s the right choice. Baby Adeline captures the affection of both. Can working together as parents ignite romance for Georgina and Stuart? When trouble comes, will their fledgling relationship disintegrate or become stronger?

All Aboard The Love Train …

The current release in the Love Train Series is PENELOPE from Heather Blanton, released on June 15th. 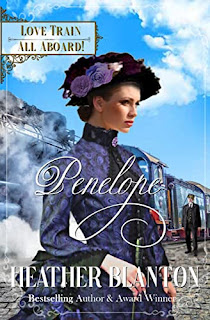 She’s about to say, “I do,” when a telegram tells her to run.

Penelope Barker believes in marrying for love … love of food on the table and a roof overhead. Marrying a crime boss then might mean a little scandal, but it also means plenty of hot meals, soft beds, and decent clothes.

Mere minutes before the wedding, Penelope receives a telegram from her sister warning her that the groom is a killer and she must run. Trusting her sister, and admonished not to trust anyone else, Penelope dons a nun’s habit and jumps a train to Misery, Wyoming.

Lucius “Lucky” Burnett is a range detective—a term synonymous with hired gun. His wake of bodies never bothered him until an innocent child was killed. Now, Lucky believes he’s not decent company for anyone, especially a good woman.

Hired by the Lodgepole Ranch to find rustlers, he meets the puzzling, sassy nun on the train and the more they’re around each other in Misery, the more the attraction grows. There’s not a thing he can do about it, of course.

But when trouble finds Penelope, the truth behind her habit sparks gut-wrenching choices … for them both.

Will the sacrifices for love bring them what they want … or keep them apart for good. Ivy Pembrooke couldn’t take it anymore! She wanted nothing more to do with her conniving uncle. In fact, she made it a goal to get rid of the Pembrooke name! The question was, how? The only thing she could think of was to marry, but she didn’t want to be saddled with a husband. Unfortunately, marrying might be her only means of escape. But who would marry her? The minute they found out who she was, they’d want nothing more to do with her. Running away was her only option.

Darius Jones made a promise. Quit the ranch he worked for in Colorado, return to Oregon, and take his half-blind mother to Clear Creek. The doctor there was said to work miracles, and Mama needed all the help she could get. But his mother wasn't the only one. A passenger in the form of a petite, blonde-haired spit fire was going to be the death of him. Literally. Was someone trying to do her harm or was trouble her middle name? Yet there was something about her, and doggone if he didn't try to help. He just hoped  doing so didn't get them both killed.