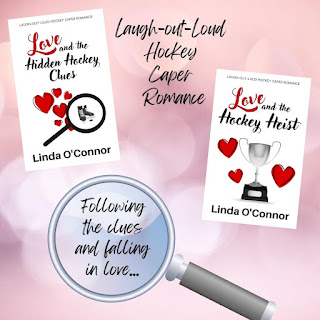 Thanks so much for hosting me! I’m celebrating the release of the first two books of a new series, Laugh-out-Loud Hockey Caper Romance. The first book is Love and the Hidden Hockey Clues. It’s about a doctor who finds a tin box hidden between the studs during renovations of her home. She thought the items were random hockey mementos but realizes they’re clues and enlists the help of the captain of the local pro hockey team to help sort out where they lead. I’ve always thought it would be cool to find a hidden treasure during renovations and that sparked the initial idea.

Love and the Hockey Heist is the second book in the series. It starts out with the theft of a treasured travel alarm clock, which triggers a hilarious series of events when Dr. Piper Roblin tries to steal it back! It involves a fake engagement with popular pro hockey player, Brent Dean. The theft of a travel alarm clock is based on a real-life experience of mine. I never did get it back, but turns out, it’s a fun premise for a story.

I also love escape rooms with the challenge of clues to decipher and puzzles to solve. I thought I’d weave that type of white-collar crime mystery into a romance. Add in a smart, sassy doctor and a swoon-worthy professional hockey player, and the stage is set for a fun, clever hockey caper. All of the (stand-alone) stories in this series will have an element of white-collar crime – like a cozy mystery without murder! 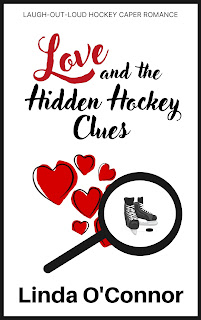 Here's the blurb for Love and the Hidden Hockey Clues ~

When she was younger, Dr. Abigail Clark dreamed of playing professional hockey, but the world wasn’t ready for a female player. That stung. She skated as far away from hockey as possible – until she lands a job in the emergency department of a hockey-crazy town and buys the house of the late beloved Zamboni driver. A tin box is discovered during the renovation of her new home, and Abigail brushes it off as a time capsule left by the previous owner – that is until someone tries to steal it. Turns out, the odd collection is more than just sentimental hockey memorabilia.

Abigail inadvertently embroils Del Braebury, captain of the local pro hockey team, into helping her sort it out. Her history with hockey players is rocky at best, but he comes in handy when she needs to access parts of the rink that are off limits. Del is happy to be tangled up in the clues of the hidden hockey loot. In the process of solving the mystery, he hopes to win Abigail’s heart!

Enjoy an excerpt from Love and the Hidden Hockey Clues ~

The foreman looked up and grinned. “Look what we found.”

A tin box was wedged between two studs in the wall in the area where the fridge had been.

Jack shrugged. “Not sure. Could’ve been here a while. When was the house built? Forty some odd years ago?”

“I don’t think it’s been there that long,” Phil said, hooking his thumbs in his pockets.

Jack looked at him. “What makes you say that?”

“The wall in front of it was patched. New drywall and painted a different colour.”

“Strange place to hide something,” Jack said with a shrug. He looked at Abigail. “What would you like us to do? Pull it out or leave it there?”

“A secret box. Are you kidding?” She’d die of curiosity not knowing what was inside. “Pull it out.”

Jack tugged on it, but it didn’t give. He took a hammer from his tool belt and pried it with a bit of force. It gave way with a pop, and Jack caught it before it hit the ground. “It has a bit of weight to it.” He handed it to Abigail. “Maybe it’ll contain enough gold to pay for your reno.”

Abigail took it with a grin. “I’m not that lucky.”

Jack waved a hand. “Excitement’s over, boys. Back to work,” he said to the other two workers who had joined them in the kitchen. Jack escorted her to the patio doors as the hammering and whirring of tools resumed. “We should have all the cabinets in by the end of the week and your water turned back on before the weekend.”

Abigail smiled. “Wonderful news.” She held up the box. “And more valuable than anything in this box, I’d bet.”

That was a bet she was destined to lose. 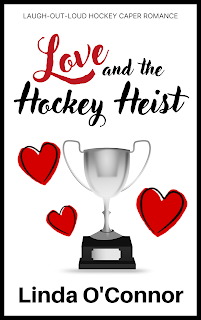 Here’s the blurb for Love and the Hockey Heist ~

Dr. Piper Roblin is peeved. She’s pretty sure her new neighbour stole her travel alarm clock. It may not be worth much, but it has sentimental value. Piper hatches a plan to get it back, but her plan relies on Brent Dean, popular forward of the Brighton Edge hockey team, to finagle a dinner invitation to gain access to her neighbour’s house.

Brent thought the invite from the stunningly beautiful cardiologist was based on a thoughtful gesture to welcome new neighbours to Brighton. He didn’t realize the gig included subterfuge, thievery, and a fake engagement. But he didn’t get to where he is without a lot of hustle and determination, and since he’s always up for some fun, let the games begin.

Enjoy an excerpt from Love and the Hockey Heist ~ This the scene when Brent meets Piper’s parents for the first time.

Piper had no words. “Mom has dessert and coffee ready.” She rested her hand on Brent’s arm. “Sorry.”

She gave her dad one last steely look and then ushered them both into the kitchen.

Her mother was sitting at the table pouring cups of coffee. She took in Piper’s set features and Raj’s sheepish eyes. “What has your father done?”

Piper sat down in a huff. “He got Brent to autograph a bunch of junk.”

“It’s not junk…” Raj protested as he walked to the head of the table.

Bailey grinned, her gaze ping-ponging between Brent, Raj, and Piper.

Alisha looked at Bailey. “I hope your little car has extra room. Brent will want to take everything he signed and do with it as he wishes,” Alisha said calmly.

Brent raised a hand with a slight grin. “No need. It’s all good.”

“Are you sure?” Piper asked. “Dad had no right to ask you to do that. You could support the charities you choose.”

Brent nodded. “I’m sure. Thank you for the offer, but there’s no need. I’m sure your father supports worthwhile causes.”

Raj crossed his arms across his chest. “I do. Very worthwhile.”

“A jersey, T-shirt, old hat, two hockey sticks, a baseball mitt, a watering can, and gardening gloves,” Piper said as she ticked off her fingers.

Alisha clicked her tongue and looked at Raj with a stern expression.

Bailey threw back her head and laughed. “Nice haul.” She raised her hand to high-five Raj. “You’re going to keep the jersey, though, right?”

Buy link for Love and the Hidden Hockey Clues

Buy link for Love and the Hockey Heist 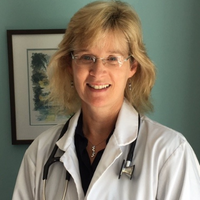 Award-winning author Linda O’Connor started writing romantic comedies when she needed a creative outlet other than subtly rearranging the displays at a local home décor store. Her books have enjoyed bestseller status. When not writing, she’s a physician at an Urgent Care Clinic. She shares her medical knowledge in fast-paced, well-written, romances – with an unexpected twist. Her favorite prescription to write? Laugh every day. Love every minute.

Thanks so much for hosting me and celebrating the release of my new series!