The Business Engagement (Boss of Seduction, book one) by Kasi Blake 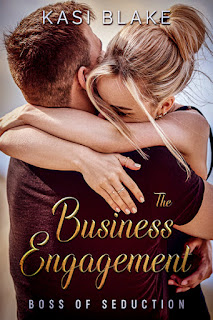 The Business Engagement (Boss of Seduction, book one)

One engagement can save two reputations... if they can keep their hands to themselves.

When claustrophobic Anna gets trapped in an elevator with hunky Skylar, the last thing she expects is to exit an engaged woman. But Skylar insists tongues will stop wagging when people realize she is marrying him and not sleeping with her boss.

Skylar’s father (her boss) invites her to spend Thanksgiving weekend with his entire family in Vermont, and he won’t take no for an answer. She has no clue how she will get through four days under the same roof with the sexy, arrogant Skylar. Then she discovers they expect her to share a room with her fiancé. Now what?

With her job on the line, will she also be willing to risk her heart?

The Business Engagement is a little steamy.

For the second time in two days, Anna woke to find Skylar’s grandmother hovering over her with a food tray in her hands. The woman wore an apron and a huge smile. Anna smelled coffee and maple syrup. Lying on her stomach, she had to push up on her elbows to see the woman clearly. An arm tightened around her waist as a masculine groan startled her. It took a moment for her to remember she’d slept next to Skylar last night.

Somehow, they’d managed to kick the sheet out of the way. Their legs were tangled beneath the top cover, and one of his hands rested just below her breast. If he moved half an inch upward, he’d be cupping the soft mound. The idea stirred desire deep within her lower region. She wanted to spring from the bed as if it was on fire, but she couldn’t panic in front of his grandmother.

“I am so happy I was wrong about you two,” Dottie said.

The woman left, and Skylar groaned again. “Sorry about her.”

Anna smiled. “Don’t worry. I’m getting used to it.”

She tried to sit up, tried to escape the sexual heat building between them, but Skylar’s arm tightened. His warm lips nuzzled her ear. He lightly chuckled. “I could get used to this, waking up next to you.” He sucked in a breath. “And you smell so good.”

A ripple of pleasure traveled through her body. Pure happiness filled her to the point of spontaneous combustion, and she wanted to revel in it even though she knew it wasn’t real. He could whisper sweet things to her day and night, and it wouldn’t change anything. A guy like Skylar could never love a girl like her.

Besides, she had the inescapable feeling he was still in love with his dead wife.

Warm breath tickled her ear. “Stop that. In case you’ve forgotten, this whole thing is fake.”

“You are hard to resist.”

A nervous laugh bubbled up her throat. “Bet you say that to all the women you share a bed with.”

“I know how much you hate lying.” His hand slid down her waist to her hip in a disturbing caress that had her heart palpitating. “I have a solution.”

“If I can stop deceiving the nicest people I’ve ever met, I would love to hear your idea.”

He got out of bed and grabbed his discarded jeans. While he pulled them on, she stared at his well-defined abs. Her mouth went dry. Golden skin that shimmered in a flawless kind of way covered his lean muscles. Logic told her to invite him back to bed for a little morning fun. After all, they were both consenting adults.

Relationship? She almost swallowed her tongue. “You want to be in a relationship with me?”

He held a hand up. “Nothing serious. Relax. One date. No pressure.”

Anna wasn’t quite sure how she felt about his new plan. She already felt vulnerable after last night’s confession about her family. Perhaps she shouldn’t make any important decisions until she had time to find her bearings again. “I don’t know,” she said. “Sounds like it would complicate things.”

She sat up and pulled the tray onto her lap. Steam rose from the fresh coffee. There were two cups this time, and Dottie had brought them a large stack of pancakes with melted butter and genuine maple syrup. Starving, Anna poured the syrup, grabbed a fork, and dug into the delicious homemade breakfast.

Her hand went up to cover her mouth while she tried to speak around the food. “Huh?”

“That’s why you’re so hungry. It happens to me every time I come up here. The fresh air helps you develop a healthy appetite.”

She gestured to the food. “Want to join me? There’s enough for two.”

“The way you’re devouring it I would say there’s just enough for you.”

She glanced down and realized she had already made a huge dent in the food. Almost half of the pancakes were gone. Embarrassed, she set the fork down. “Sorry.”

He crossed the room and leaned down to place a quick kiss on her forehead. “I was joking. Eat as much as you want. I need to go downstairs to give my mother the bad news.”

Had she missed something?

He held his cell phone up. “I just received an urgent call from a former client who desperately needs my help. So, you and I will be leaving for Boston as soon as you get dressed and packed.”

Part of her was relieved, but another part didn’t want to leave the Griffin’s beautiful home. The family she’d longed for seemed to be right at her fingertips. It was too bad none of it was real. They had only welcomed her because they believed she was about to marry Skylar. Someday they would be disappointed to learn the marriage wasn’t going to happen. A break-up was coming. It didn’t matter that he was open to dating her. He was only doing that to keep her from blowing up his plan.

“What if your mother doesn’t believe you?” Anna asked.

“I do this all the time.” He shrugged before slipping on a snug blue jersey with a football logo and the number 23 on it. “My parents have been giving me the poor Skylar treatment for years. I can only take it for so long. Then I get an emergency phone call. Maybe they don’t believe me. I don’t know. If they don’t, they never say anything.”

“What if they say something this time?”

“They won’t.” He gave her his patented grin. “Even if they suspect I’m lying, they’ll just assume you and I want to be alone. They know we have limited free time. If we were in love, I would want to have you all to myself for as long as possible.”

The sexy timbre of his voice turned her insides to mush. If he loved her... what would that be like? Would he be controlling or supportive? Attentive or too busy for her? Trusting or jealous?

He leaned down and kissed her on the lips. “Mmm. You taste like maple syrup.” 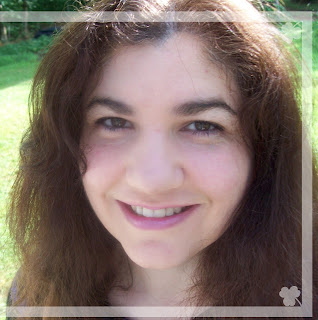 As a former writer for Harlequin, Kasi Blake knows romance. She weaves gripping, emotional stories that will pull on your heartstrings. Although writing is her passion, Kasi also enjoys trying new recipes, shopping until she drops, and spending time with her fur babies. She currently lives on a farm in the Midwest.